Hello! I’m so glad you are back around these parts.

As you know, I’m all about trying out the newest trends in cosmetics and styles, and I thought this week we should talk a little more in detail about my favorite thing right now: Microblading. 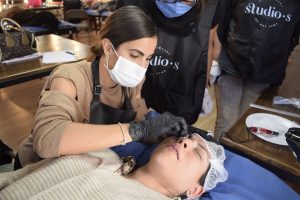 If you read my post a few weeks ago, you probably know that after some consideration I had decided to get my brow beautified by one of the leading experts on the art of microblading, and I couldn’t be more hyped with the results as the weeks progress.

My eyebrows have always been a point of annoyance for me, mainly because I think they are (or were I should say) too thin and short, with not enough hair to at least look full, which made the rest of my face look thinner than it was.

Anyways, long story short, I had weird eyebrows and no matter what I did to them, I was never entirely happy with the results.

Enter Name of Artist and her mysterious cosmetic arts from the orient, and voila, I have a new look.

Since I’m so happy with the results, I thought I should talk to you guys and gals about it and answer the two main questions Name of Artist told me she gets the most (which incidentally were the two question I asked her the first time we met): What is microblading and does it hurt?

What is microblading and does it hurt?

Let’s tackle the first half of that question first.

Microblading, also known as micro stroking or feather touch, is a cosmetic form of semi-permanent makeup. It has existed in Asia for hundreds of years, and it is now just recently making its way into the other side of the world (and becoming the rage I must add) due to the incredible results it offers.

In microblading, properly trained beauty technicians handcraft hair-length incisions on a person’s eyebrows and applies the pigments. These pigments are carefully mixed and balanced previously to emulate the natural color of a person’s eyebrow seamlessly. Each stroke represents a single hair strand and becomes indistinguishable from the rest.

When the process is completed, the results are amazing.

Not only does your eyebrows look fuller, but the technique also serves to give them shape and definition, by which you even end up needing fewer depilation jobs for upkeep.

Microblading isn’t strictly a cosmetic procedure either; it is being implemented more and more as a reliable way to reconstruct damage to the eyebrow area (in cases of burns for example) to restore their natural appearance.

Now, for the second half of the question I’m going to quote Artist:

Me: Does it hurt?

Artist: It really shouldn’t. Especially, not when the person knows what she’s doing.

In my particular case, I felt nothing. I knew she was doing some work up there, but after applying some anesthetic cream and getting me distracted with some conversation, I barely felt anything.

I’ve also been using a vitamin D based cream she recommended, and they have healed without issue.

So, there you have it folks, detailed answers to the two most popular question on the matter. But just in case, let me also give you a little TL; DR as a form of closing:

Q: What is microblading and does it hurt?

A: Cosmetic magic, and nope.

error: Content is protected !!
Change Location
To find awesome listings near you!